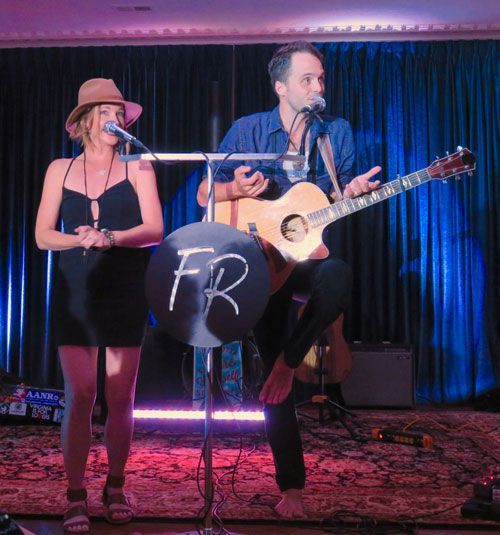 Jordyn and Shawn telling stories in between songs

So allow me to paint you a picture. You, as part of an audience, represent a beautiful beach, and the refreshing folk duo of Flagship Romance is the ocean, their waves rolling in over you, melodically drenching you with stories from their sea of life. Some of their waves are soft and of angelic harmony. While others, white tipped and towering, come crashing in, emotionally reaching every grain of sand.

Seen live, Flagship Romance is like a story telling pendulum. The times away from their duo mic stand, eyes meet with a loving conformation of their chosen path. Then the pendulum swings towards you and trust me, ya feel the love! But in between each song comes a magical story telling session, which I’ll simply call, songs without melody. They range from humorous to serious, but always lay the special pathway ahead.

Flagship Romance is Shawn Fisher and Jordyn Jackson. The last time I saw this young married couple was two years ago. Since then, in a spontaneous blast of inner authenticity and just before recording their new CD - Tales from the Self-Help Section, Jordyn chopped her long golden locks, leaving behind the polished look of her past jazz vocal days. Hey, I say if the “do” fits wear it, and her new do does! With hypnotizing ballet like hand movements, Jordyn’s notes are delicately high and technically perfect, giving me hints of Kellie Pickler or Lee Ann Womack, with a little less twang. Shawn on the other hand is a bit more complex. Also high in octave range, he offers up an infectious yeehaw of enthusiasm! While both dig deep and deliver all that powerful ocean has to give, Shawn not only gives of himself, but of the third instrument in this group, his guitar. At times, with the intensive energy coming out of this young man, which reaches right down through his shoeless tip toes, I even felt like I was watching the reincarnation of Lindsey Buckingham having a “Big Love” moment. It’s their harmonizing however, that vocally makes them one. Perfectly matched, it’s of the best you’ll ever hear. 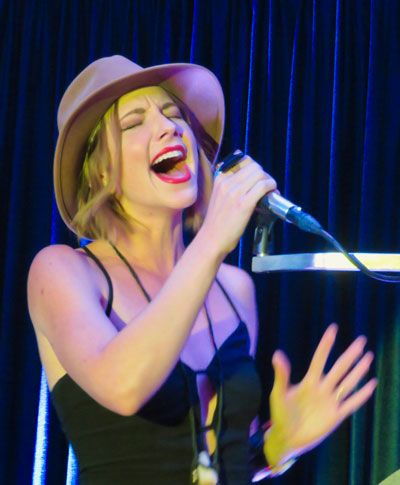 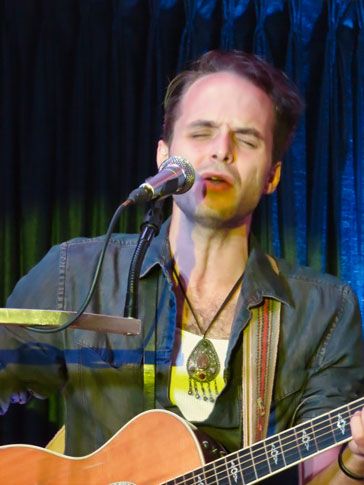 Their latest album, “Tales from the Self-Help Section”, was fueled by a very successful Kickstarter campaign. With help from Executive Producers John & Diana Jaeger and a matching donation program suggested and structured by Jordyn, they achieved 165% of their goal. Don’t you just love it when a plan comes together! Produced by good friend Lucio Rubino and recorded at his The Fish Tank Recordings Studio in St. Augustine, Florida, it features 12 new songs. Lucio also performs on the album playing a host of backup instruments. Their lives always having a story, Jordyn tells me, “It was kind of interesting, because when we booked the studio time Lucio had just built a new studio, but then hurricane Matthew came in and demolished it. He luckily got most of the equipment out and moved back in his old space so we recorded there.” I just had to ask what prompted the album’s humorous name? She says, “It was a total accident, we were playing a home concert in Pennsylvania and Shawn jokingly said, this next song is going to be on our 4th coming album, Tales From The Self Help Section. It was out of nowhere and I [Jordyn] said, I think you just accidentally named our album!” 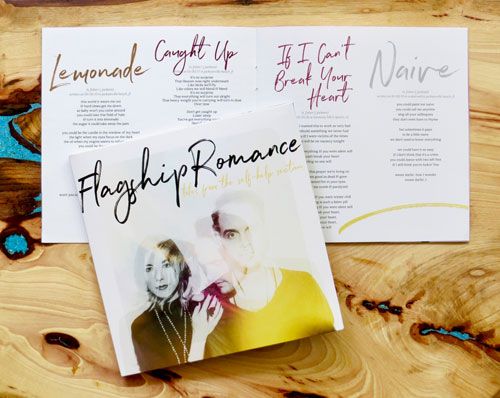 As an artist myself, I ask about their creative process, how new songs are born and Jordyn explains, “It’s mostly Shawn playing something and then he starts singing what he calls placeholder words, and most of the time I say, no babe, those aren’t placeholder words. #1, they’re really good, and #2, I know exactly what that’s about. For some reason I’m able to translate the subconscious before he knows what the song is about and then we just of build on that.” In some rarer cases, such as with their new song, “I met Jesus in Buddha's Back Yard”, it was born out of a dream Jordyn had.

Tales From The Self Help Section may be a bit of a window into Shawn’s admitted bouts with anxiety, but Jordyn’s bubbly optimism counters quite admirably. In my opinion this collection delvers way above typical folk album expectations, with songs that should be solid country music hits such as, “Caught Up”, “Growing Up So Fast” and “Scare Yourself”. As well, “Big Sur”, which has that mysterious Hotel California feel about it, is nicely done. Then, in what I’ll describe as John Legend-esque in feel, “Naive” delivers a soulful, jazzy vibe that becomes a delicious palate changer in the middle of a great meal.

It may be “If I Can’t Break Your Heart” though, which showcases Shawn and Jordyn’s individual voices best. It has to be said though, it’s this duo’s wonderful story telling ability, through their many youthful experiences, which allow them and their audiences to truly bond. The average age of the audience I was with was decades greater than that of Flagship Romance, yet their narrative was relevant, relatable and yes, always entertaining. I will say having listened to the CD over and over in the car, it too offers its own flavor, with background instruments lending an additional musical fullness. 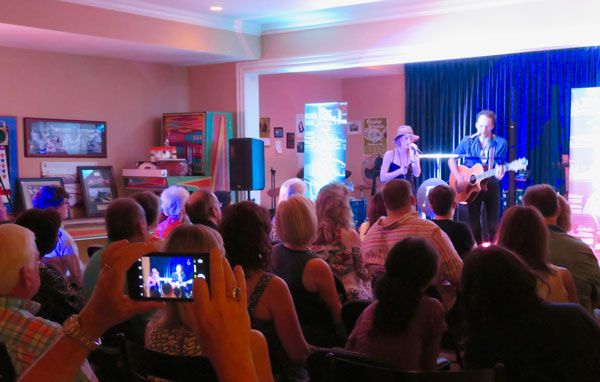 While Shawn & Jordyn tour about eight months out of the year, they’ve just started a six month long tour with 105 dates of performing and promoting their new album and past songs. Having lived in Jacksonville Florida, they’ve added a twist to their lives by giving up their apartment and putting all of their “stuff into a storage unit”. Shawn says, “So we technically don’t live anywhere right now.” Jordyn goes on to say, “We’re actually using this tour to feel out where it feels like home. Right now we live in our Suburu.” The tour is taking them from Florida, up to Northern Massachusetts, west and up into Vancouver, then down to San Fransisco, then a plane trip to Maui and back, then back down the coast, and across the states, with a stop in Texas to record another album in November. In other words, these two rolling stones won’t be collecting any moss! I have to be honest in saying though, if “Caught Up” finds it’s way to radio, it will be a game changer for them and I think their Suburu will become a bus! We wish them well on their journey!

FLAGSHIP ROMANCE - OUR MISSION
Shawn and Jordyn have made clean drinking water their mission. “The two of us believe that 800 million people without access to safe, clean drinking water is 800 million too many!” Because of this, they’ve aligned their music career with clean water causes by organizing the Clean Water Fest. For more information please visit these websites: Clean Water Music Fest and Charity Water.