Many moons ago, at least 25 to be more precise, a San Fransisco based art publisher caught me by surprise with a new term, high tech, high touch. As he simplistically explained it at the time, while trying to make a point, as we become more engrossed with technology overload, we will grasp for something more real. Art was his way of thinking.

Two things are important to mention at this point. First, I know now, and to be frank, he might have even mentioned it and I’d forgotten, that this term was likely coined by John Naisbitt and Douglas Phillips’ 1982 best seller “Megatrands”. Which was also revisited in a second book, appropriately titled, High Tech, High Touch - Technology and our search for a meaning. Second, we’ve come a long, long way in the world of technology since 1982. Even since my publishing friend shared this phase and caught my ear. Technological overload would be the understatement of the century.

The authors at the time mention a Technologically Intoxicated Zone, where a distinction between real and fake becomes rather fuzzy.  As we stand on the doorstep of a new decade, I think we can agree that the authors were on to something. As soon as you see a human texting while driving, you quickly realize that reality has slipped away.  His or her two ton car rolls along at 50 mph, or roughly 73 feet per second, with on-coming traffic, pedestrians and trees to hit. Basically the whole outside world has left them, as they have become one with their virtual friend and device. Any sense of reality of the horrific violence they could subject is without thought or caring. They are someplace else.

Though the authors of High Tech, High Touch, speak more of fear and the impact of technology, my associate at the time was putting a different spin on things. He felt the more we were consumed by technology, the more we would seek reality. I’m not so sure. I have no idea how old you are, but I have a strong assumption you have an interest in the visual arts. If you do, look at the artwork presented in the video game industry. This is no longer a silly PacMan game. The gaming artwork provides us with a virtual world we can not only enter, but participate in. Video games may seem on the face of things to be a young man’s game, but trust me, the demographics would show that they cover all ages and genders. Last, where real sports are down in the ratings, games are up. Where the film industry lags, games flourish. They are addictively real, but they are not real, they are digitally art driven. Visual art at a level sometimes hard to conceive and presented on what is now our favorite format, the screen. The screen of all sizes, from larger than we could imagine a television ever being, to so completely mobile we never have to be without. 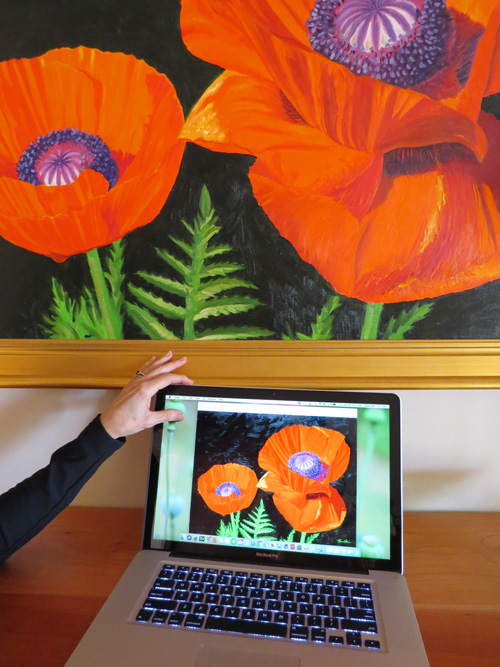 The visual arts as we think it, has been constantly redefining itself regardless of video games anyway and thus, becomes a broader brush. Digitally created visual art is not new and will continue to gain ground. But I believe traditionally created visual arts will always be the foundation of a high tech, high touch world. Our fixation on the screen or a piece of glass, isn’t truthfully ever quite as nourishing as a real meal would be.  Just imagine the difference between fresh or canned peaches. A lot right? Now move into a futuristic world where you eat a food pill to feed and fill you, and then virtually consume a meal as a video feast. It wouldn’t be long before you longed for the taste, texture and chew of real food. Or would it? I’m not so sure anymore.

Real hand made artwork is real food though. The best of it begs for you to tuck a napkin into your collar, and wipe the excess off your mouth occasionally. It has texture or feel. It wants you to touch it, but this is one place where we or society have failed it, or I should say, much of it. The visual arts has been given lofty definitions such as priceless in value. Some of this value is real, some of it is perceived, but the perception is, DO NOT TOUCH!!  Say, DO NOT TOUCH enough, and a fear arises. A young child’s joy in coloring is met with the unapproachable thought of getting his hands smacked, this grows into the reality of the museum guard sourly approaching, finger pointing, and arms waving in stay back motion. The fun is gone, even though our visual intrigue begs us to invest in the approach, our primal inquisitiveness asks us to explore, and in our exploration we get into trouble. How fun is that? The visual arts themselves, asks to not only be viewed from afar, it asks you to come closer. Then it whispers in your ear, touch me and you get slapped for it.

Artists, never stop letting the ageless art lovers touch your work. Allow them to relish in the feel of art, not just a look from a far.  Screens are now being touched everyday, millions of times a day, and the net result is something good happens when they are touched. A discovery, a command, a result, an interaction.  If the visual arts we know and love are only to be seen, and their unique feel of paint, bronze, clay or stone, is never felt, this type of art will loose its high touch ground to a high tech world. New generations are immersing themselves in this high tech world, where digital renderings bring this world to life, allowing the viewer to move through the art and participate with it. It’s a place where fantasy and reality meet. It’s a digital world that says to a boy in a wheel chair, come with me, I not only want you to play baseball, I want you to hit a home run, score a touch down, win the race, run, jump, be free!

Visual Arts Must Stay in Touch

The visual arts we think about as such, must stay in touch, literally!  It says, I’m filled with originally and by touching me, you can touch the hands that created me, that grew emotionally and spoke expressively. This art kind of art doesn’t need to say stop visiting your virtual world. This art needs only to provide the reality which allows the game to feel real, while letting the player know it’s actually not. A famous fantasy painter said to me once, (in so many words), for fantasy art to be believable, it has to have a sense reality. That means, you can have a fish three stories tall, swimming through a pond of jelly, but you still know it’s a fish.

I have never wanted to play a video game while drinking a glass of red wine. I have however lovingly gazed at a painting while doing so.  I have never wondered how a digital artist mixed a color, or how many mouse clicks it took to do what I’m seeing on screen. But I have looked at paintings two hundred years old and thought of the dedication and enthusiasm for life it took to blend hand created oil based color, and the movement of each brush stroke to create a masterpiece. That is high touch. Reality, not the simulation of reality. Virtual reality may have its place too, but not to displace our reality. Rather, to enhance it.

Read more about art and technology by Tom Neel:

Has Art Been Redefined?