The Hunt - Beachcombing for Sea Glass

The ocean has an alluring presence about it. Its awesome power and even romance intrigues we land born humans. It is after all, that which connects us to far away lands, no matter what land you are from. It is also there, at the shore, where the land meets the sea, this artful life story begins.

How is it we are given this marvelous transitional area, where solid land mingles with its fluid counterpart in a such a granular fashion? Massive areas of land and sea cover our planet, while only slivers of beach connect the two. The beach is that perfect combination of both and is a place delivering stories from the sea. It delivers treasures too! With our toes in the sand, one such story of treasure, is that if sea glass.

The beach itself is a composition of many things, mostly rock, organic matter and even living organisms. It itself has a story, with a life as something bigger, reduced to tiny particles through frictional forces and transported to shore from traceable origins. We use sand for all sorts things such as glass, mortar, concrete, sand blasting, sand casting and sandbags. Sand is also artfully used to make sand castles, sand animation and even amazing works of highly detailed art by Tibetan Monks.

Sand though, also assists the process of making this glass from the sea. Funny to call it something from the sea, as it is actually man made. It is funnier still to think of it as man made when its main element is actually from the sea. More accurately, glass is processed and formed by man. Sea glass though, is the ultimate recycled artifact. It's something from nature, made into a glass, deposited by littering, storms, shipwrecks and such, left to the sea, only to be tumbled and worn over years to a smooth and frosted, endlessly shaped appearance, before then being deposited back to land and found in the sand. There to be picked up, often made into jewelry and adored for its new life of luster.

My wife Linda and I have dear friends who reside in Palm Beach Florida. They live just a block from the beach and spend considerable time there. During our visits they exposed us to their beach combing of sea glass. A few vases and bowls in their home display their bounty of colorful gems. Sea glass feels good to the touch and our first exposure to it was looking at it like a gem. All sorts of cuts and colors and out of its natural habitat as most gems are seen. 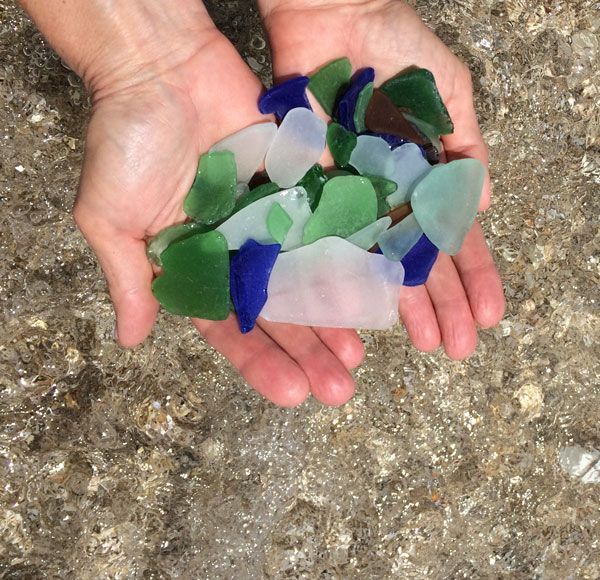 Visit the beach though and find your first piece, you can become thrilled in the hunt while having your heart beat dropped to almost meditative levels. It's a true process of concentration, caring about your search, while not really caring about much of anything at all. Heck, you're at the beach. But then, a light wave comes in and as your feet become submerged in the ingress and egress of he foamy salt water, something quickly catches your eye. A sparkle of color and you go from a sluggish pulse rate to Richter scale mode, plunging your hand toward it before the sea takes it back!

The non-pro at this, I found myself grabbing a handful of sand only to carefully dissect it in anticipation of good fortune and there, lying in a mass of granular tan, would be a still wet, radiant gem of irregularity. No two pieces the same shape, with the most common colors of green, browns, white, a sea foam color and blue or more specifically cobalt blue.

Sea glass is formed from broken functional pieces such as a wide variety of bottles, tableware, even tail lights and those pieces become shards and those shards are in a sense, sand tumbled and blasted to soft edged and frosted pieces. Each with its own size, shape, color and appearance. It was also told by our friends that you often can find pieces in a progression of one color. I have no idea of the odds of this, but sort of did experience finding several brown pieces in a row, only to then find several green. Blue is less common. There are as well very rare colors, which makes sense just based on the common colors of bottles we see in use today. Since sea glass can be easily decades old, the glass colors of that time are potentially there to be washed a shore.

Our friends are pros. This husband and wife duo have a heighten sense for the search. She even found a piece with wire in it like seen in old bank teller windows and he ... well, I thought I was becoming a master when I approached him with about 11 pieces or so in what was close to an hour walk. He reached in his pocket, pulled out a handful which he counts as he goes along and had 68! I kidded that his trick was bringing a handful from home in his pocket to keep his dear wife puzzled and amazed. But in truth, he was just plain good at finding it. I'm convince we all walk by more than we find. Eh', except him!

Past its magical beach combing addiction, one which can make hours disappear. What do you do with that which you've collected? The simple answer is, what ever you want. It can be as simple as being dropped on your dresser to see each day or placed in a small dish or a even bowls or vase for the larger hauls. I brought some home to Virginia, bought a beach styled photo frame at Michael's and applied pieces to its face with glue in a varied color and shape pattern, much like putting a puzzle together around its perimeter. Once completed, I shipped it off as a gift to our friends. It was a small gesture of appreciation for the stress relieving properties they had shared in our hunt for sea glass! 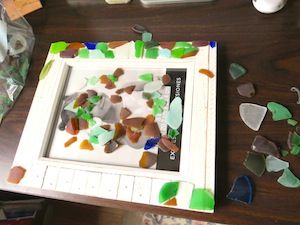 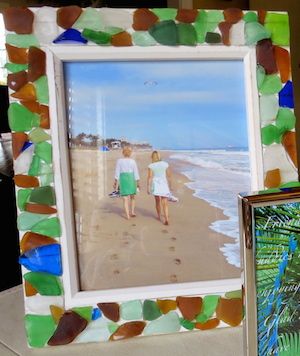 Tip: I used the glue pictured, E6000.  Both the glue and the frame were purchased at Michael's Arts and Crafts.

After this experience and our new found knowledge of sea glass, the universe brought Linda and I a jewelry artist to the gallery who works in recycled silver and what else? Sea glass of course. Her name is Christine G. Epstein and she definitely knows how to live an artful life. Its an interwoven world I'll tell ya. Read all about her here.

Sea you at the beach!