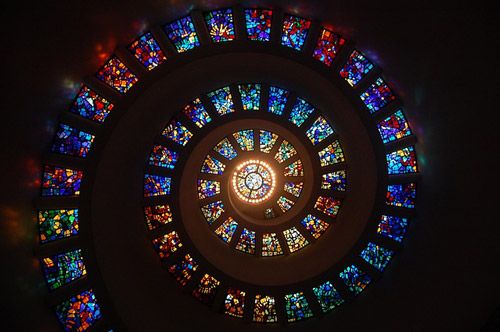 Creative types sometimes stumble around in the dark looking for themselves

Creative types sometimes stumble around in the dark looking for themselves. Their path less defined than most. Early man looked only for the basic needs of survival. Food, shelter, water, not being eaten by something, and of course, procreation. Modern man’s journey is a bit safer, while still following those same underpinnings. But I think modern creative types also see procreation as a broader sense of creativity. The birth of an idea. An artistic one, a calling inner voice of self expression. Trust me, you may think this is eccentric, but honestly, it’s no more so than the ownership of almost anything.

As humans, we quite easily acquire objects of our desire, functional or otherwise. Creative types are not without possessions, but their anomalous behavior is much more about making or building, or even performing something within. Sometimes this urge even overpowers that path of basic survival. The procreation of ideas is the driver to their lives. All else becomes relegated to the back seat, or even the trunk, held hostage to this greater cause of self expression.

True artists may have a choice in how they express themselves, but they honestly do not have a choice in whether they expresses themselves or not. What is inside, will come out one way or the other. It can be as brilliant as a best selling novel or as sad as a song sung, standing on a dirty city sidewalk, with a guitar that often looks better fed than the performer, while low denominations of currency are tossed into the instrument’s case. This is the hostage in the trunk. The performer so in need of a stage, that any place becomes one.

But imagine a world without a creative type like Leonardo da Vinci, one of the greatest visionaries of all time. A person who living within the meager resources of his world in the 1400’s, would make the accomplishments of Steve Jobs look no more special than the street performer. The child of a single peasant mother, this one life blossomed in such a way that he is still considered one of the most special humans to have ever walked the face of the earth. And while his accomplishments are so inventively vast, he’s mostly known simply as an artist.

What is the purpose of creativity? Why in the hell should anyone’s willy nilly self expression matter? Why put anything on a wall, much less paint the ceiling of a chapel? Heck, why put a spectrum of colored glass in the chapel? Why sing, or more importantly write or compose a song to be sung to the heavens or anyone else? Or dance about, seemingly carelessly to rhythms? Or act with drama or comedy, write a story, play with clay, or mold in bronze? Why make anything functional also beautiful? Why care about words that rhyme? Why have clothing be colorful? Why should design have anything to do with aesthetic? Why should a photo of ourselves or our surroundings be important? Why should nature be viewed as beautiful? Why should narrative and character development be of any interest at all? Why should art in school matter? Or at least as much as a home run, touchdown, or one through a hoop?

The human brain is amazing and complex. But human nature even more so. We as a society, stumble about in the dark much more than the average artist. Our priorities are truly a mess. We have in many cases, dumbed ourselves down to the importance of popularity over true contribution. We make the hunt for ownership much more enticing than the ownership itself. We think more about reducing ownership or services down to tidy monthly payments, than we do about the plight of humanity itself. We see a sport more important than invention, unless that invention makes billions, than we care more about this than we do the contribution or the invention itself. We seem to be content with things like replacing hard liquor TV ads with that of endless pharmaceutical ones, the side effects of which appear far more alarming. We see world human suffering or the monstrous actions of our species as ordinary. We are capable of doing work without passion, over happiness of any kind. We see rush hour traffic and ourselves placed within it as productivity.

Let me share this. Creativity through the arts, is not only the ultimate form of human communication, it is exactly how we record ourselves through time. It is how we tell the future, where we are and where we should be heading. Art really is the ultimate form of human archeology, the great story teller. But it is also the seed for our deepest passion, the inspiration of our ideas and invention, our emotions in a visual or audible state of being, and no creative type is ever in the dark about that. I say celebrate the arts, Live An Artful Life!