The Artist's Perspective - A Sad Loss of Creativity 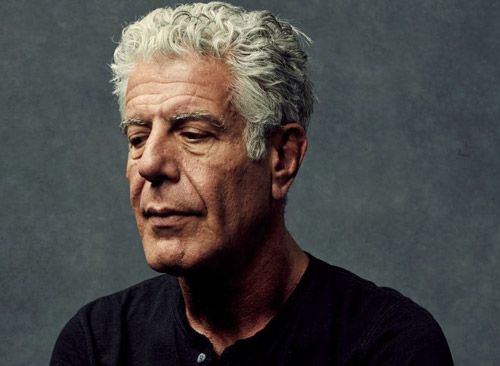 On June 8th, celebrity chef, writer and television personality, Anthony Bourdain took his own life just a couple of weeks before what would have been his 62 birthday. While the creative embers of this man will leave a lasting glow, the fire has been put out. Sadly self-inflicted. Why? is all we can ask ourselves.

Mr. Bourdain traveled to the far reaches of the world telling real stories and tasting every kind of food possible in the process with his CNN program, “Parts Unknown." I watched Bourdain’s last interview with Fast Company.com, which thankfully was very frank and kept raw and to the point, unlike the polished stuff of typical broadcasting. He was comfortable and not guarded with his language. You felt with him you were getting the artistic truth. Realism. Hearing an authentic creative type, a past drug addict, and a man may be only afraid of himself, was a real pleasure, mixed with the pain of a lost life.

Bourdain - “I’m not interested in telling stories with competence. I look to tell it with some style and originality and some creativity that’s interesting to me and the people I work with. And there have been times that resulted in failure; it didn’t work, it didn’t communicate anything like I wanted. Often I end up getting another story entirely, that’s even better, or very different. That’s good. But there are other times I fail miserably.”

Of course, when he speaks of competence, he does so in wanting more than simply delivering adequacy, and Anthony Bourdain speaks a lot about failure throughout this interview. He knew as an artist, fear of failure will stifle the hell out of you creatively. He was always in search of scratching below the surface without the fear of feelings or results.

Bourdain - “A powerful reaction, one way or the other, is infinitely preferable to me than pleasing everybody. If I walk into a room where everybody agrees with me, I find that frightening and dismaying and boring as f- - k.”

In speaking about years of addiction, his candid words open us to the possible reason he finally took his own life. Bourdain - “Deep in there, no matter how low I was, my circumstances, I had a high enough opinion of myself that I thought it was worth going forward. I think a lot of people in a similar situation, for whatever reason, looking in the mirror, see somebody that is unworthy of good things and allow themselves or excuse the downward spiral.”

It’s unfortunate Mr. Bourdain couldn’t suppress the demons within himself and I can only imagine the chase he was on to constantly deliver fresh approaches to himself, much less his audience, was exhausting. I also think he was at odds with his stardom and himself as a person, an unfortunate loss none the less.

In the same week as Bourdain’s death, we lost yet another creative type by suicide. Fashion designer and entrepreneur, Kate Spade, just 55, took her life on June 5. I can recall Kate Spade’s interview with Guy Raz on one of my favorite podcasts - “How I Built This." With her husband Andy, Kate Spade (sister in law of comedian David Spade), built a very successful creative company before selling it for millions. I tried to imagine what it must be like to sell your entire name, even as a brand. I wondered if a piece of her must have felt missing. Sadly, another bright and creative life is lost.

All lives are important. While we as artists strive to bring a snapshot of the human race to our world, there are those who even after achieving greatness, celebrity, awards and wealth, find themselves empty and alone. The CDC says the suicide rate is up 30%, which is alarming. I end each of my monthly columns with the words, Live An Artful Life. I mean those words. If you or anyone you know is struggling, I ask you to please not only embrace these words but please call the Suicide Hotline 1-800-273-TALK (8255) right now. There is a person there 24/7, who like me, believes your life is valuable and worth it.