What do the words - three dimensional, mean to you? Let's explore the true depth of 3-D and I hope it not only opens up the artistic minds, but all minds to a broader way of thinking.

It matters not if you paint, sculpt, write or perform. It actually doesn't matter if you are creative at all. Understanding that we live in a three dimensional world and how that world works for everyone, is a powerful tool and worth understanding.

First, it's good to understand two basic words, dimension and perspective. Dimension has to do with measurement, but also with scope. Even though the stretched canvas an artist paints on is technically a three dimensional object, artwork created on canvas is generally thought of as two dimensional, height X width. What artists have the option of doing through technique, is creating a 3-D illusion upon it. Through the use of perspective, (to be further explained), texture and value changes, a painter can make it appear as though the viewer can visually enter the painting. This gives a three dimensional effect or perception, when in reality the surface of the canvas is flat.

I will mention that especially in impasto techniques, paint applied to a thickness capable of casting shadows upon itself, does truly have a dimension of depth. But works of art on canvas are still considered two dimensional - more often characterized as having a textured surface, rather than a three dimensional one.

More to my two dimensional point, a painter can paint a wine bottle and make it appear round, when in reality the painting surface is flat. But a sculptor can actually recreate the wine bottle three dimensionally and so, this work of art would actually have height, width and depth, but even more importantly can be viewed in 360 degrees.

In light of this understanding, ask yourself this: When you see a 3-D movie, is it actually three dimensional or just a three dimensional illusion? It is of course nothing more than an illusion. The projection screen is flat, as is what is being projected upon it. Special filming techniques and glasses may offer an sense of three dimensional reality, but it's just an effect. Where painters create a three dimensional effect that pulls you in, 3-D movies tend to rely more on in your face trickery, like that of a broom stick waving about at your nose.

In any event, there are illusions and reality, and the beginning of reality for something truly three dimensional, is being able to view it from 360 degrees. Even more so, from all angles_top, bottom and all sides. This to me is key and in truly understanding it, a deeper sense of reality comes into play. I may be a two dimensional artist, but I live in and I am inspired by, a three dimensional world. I keep this in mind.

Years ago, in my time with a major fine art publisher, I was once assigned the task of essentially saving an artist's print publishing career. He was a master technical watercolorist, but his prints were not selling. After a trip together, he sent me a preliminary drawing of his next work of art to be published. It was a town we had visited in Vermont. I asked him, "Where is the post office in this town?" He said, "I have no idea?" I then said, "How about the general store?" He became frustrated and asked why I was asking these questions? I told him the problem I was seeing with his art, was that he wasn't caring about the story and only creating it at face value and in turn his audience was only taking his art at face value as well. in short, his art was missing depth.

So now let's look closer at the word perspective. Where dimension covers measurement and scope, perspective is about focal point and point of view. If you were to look down the center of a main street, it would appear wide where you are standing and the buildings would appear tall. But looking further down the street, the street would appear to become narrower and the buildings shorter. We know in reality that this is not the case, but our perception of it appears to be real. The furtherest point in the distance is the focal point and the act of observing it and an artist recreating this effect is the use of perspective. 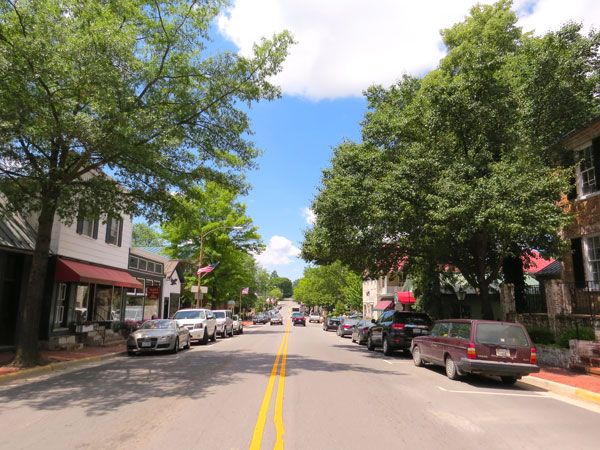 With distance, things will also appear to become lighter in color or value and texture too will fade away. Focal points also have a way of drawing your eye to them and artists compositionally use this to bring and keep your eye in the picture. This all creates an illusion of being three dimensional, when in fact with a painting, the surface is flat.

Now as I have also mentioned, perspective can also be defined as point of view and this is where things come together. As previously mentioned, if an artist painted a bottle of wine, through technique, they could make the bottle appear to be round, though their canvas is flat. But the sculptor could recreate the bottle exactly, capable of being viewed from 360 degrees. You might ask, what's the difference_it's round? Let's explore.

Imagine you and I were sitting at a round table, each having a glass of wine. The wine bottle itself is sitting right in the center of the round table, with the front label pointed towards you and the back label pointed towards me. It's our first time meeting each other and neither of us knows a thing about the wine either. This is often also the case with many topics and people.

Our conversation begins by talking about the wine. On the front label you are swept up in the romantic notions of the winery's logo, the type of wine and where it was produced. You are talking to me from your perspective or point of view, the only one you have, but it only tells your side of the story. You can't see my side.

My side is plastered with data and government warnings about being harmful to pregnancies, affecting my ability to drive and operate machinery and that it may cause heath problems. Got you thinking now? As we talk, it becomes apparent we both have a different perspectives and or points of view about the wine and thus, possibly different perceptions and opinions even about each other. This likely sets the tone. But Having the scope to think three dimensionally is a basic tool for the understanding of different points of view and seeing more than one side.

Three dimensional artists have the luxury to broaden scope through the use of three dimensional representation or all sides of their subject matter and should take every advantage of it. Two dimensional artists on the other hand at least have the ability to think in 3-D or with as much depth as possible with the view and view point of the subject matter they represent. In other words, at least being mindful of even that which the viewer cannot see and the narrative questions they might mentally ask..

Something truly three dimensional not only has three dimensions, it has the ability to advance our understanding of it, thus broadening our scope of it. It's all about your mental and physical ability to move around the object, rather than the object moving around you. This is why moons and planets amaze us. It's hard to get a grip on that which circles you.

For an even deeper understanding of this, think of how identical twins view each other and the scope and point of view they hold of themselves in doing so. Just imagine going to a party and seeing yourself there and how that might even mentally change the way you think, present yourself or act by doing so? It would be interesting and certainly a very three dimensional experience!