One of the great joys of this magazine will be introducing you to interesting people we've met while living our own artful life. Shane Chalke has been a close friend for over 25 of those years. Reading his bio will shed light on his very successful business background, but today, Shane is a shining example of someone who really enjoys living an artful life. Now in a sense, semi retired, he and his wife Monique, split their year between Banner Elk, NC. with his BE Jazz company and Sarasota, Fl., as a hard working, full time jazz musician. His first story gives us a one week taste in a year of his life today. Filled with comedic observations, it says a lot about our society as well. - Tom Neel 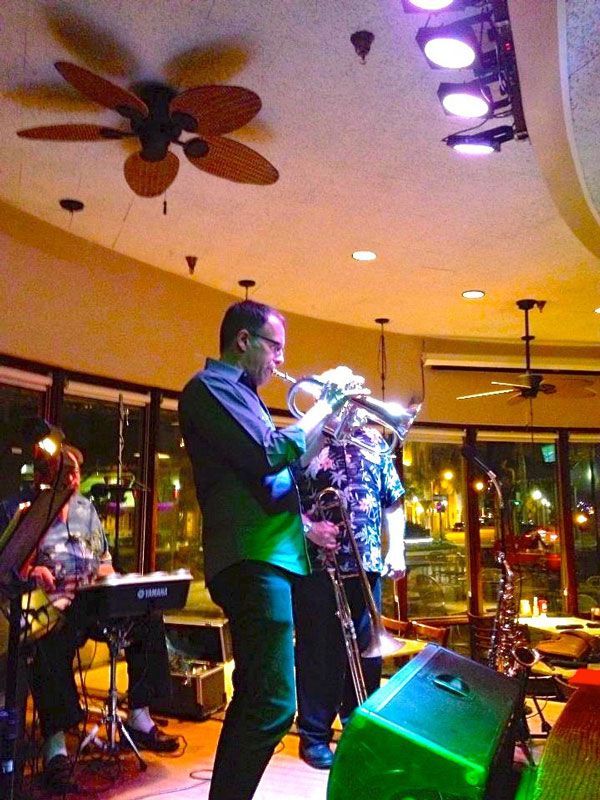 Tuesday, 8:15pm
Doing my "Jazz Trumpet Greats" show at Ocean Blues in Sarasota. Playing music from Herb Alpert, Chuck Mangione and Armstrong. Funny, "one of these is not like the other". Herb Alpert didn't actually play any jazz, but what do I know, I'm just the horn player. Still, for people of a certain age, Herb Alpert IS jazz... when we fire up "A Taste of Honey" they go crazy.

I look around the room. Mobbed for a Tuesday night, all seats full. I know this crowd, though – they'll all leave after the second set, tipsy and yawning. They love it when I talk to them from the stage, telling them stories from jazz history. I force feed them a little real jazz, playing Lee Morgan's "Ceora". I tell them how Lee Morgan died at age 33 when his wife shot him on the bandstand at a NYC club called "Slugs" of all things. I tell the ladies in the room not to shoot me until after my solo, at least. It's a beautiful tune.

Wednesday, 7:05pm
Playing in the backup band tonight for a well-known Sarasota singer. She's a total pro – doesn't need the handholding and stroking most singers demand. Makes it easy for us hired hands. Oh, how some days I just love being a sideman – no responsibility but making music. Don't have to talk, worry about the economics, or whether all the musicians show up (or not show up). Managing musicians is much harder than running a normal business. The best of them tend to live their lives in disarray. Some of them don't have cars, and some don't know what day it is. When I book a gig, I call everyone a few days before and the day of, just in case. Still, train wrecks happen.

This gig is going well – it's at a concert venue in an orange grove – sort of the Florida equivalent of music festivals at wineries in Virginia. A solid senior citizen crowd, and the singer knows just how to work them. Even though it's not my gig, I can't help subconsciously counting the revenue to see if it's working. Tonight it is...

Thursday, 9:26pm...and tonight it's not. Playing jazz standards with a quartet tonight, but the time is all wrong. Most of the seats are full, but I don't see any dinner plates. I see a few martinis, but mostly bottles of San Pellegrino. The owner won't be happy if the average ticket is a paltry $20. People don't realize how much money needs to be spent to afford live music... and that's even considering that the average musician makes less than the average server. I wish more places would charge a cover – takes the pressure off. I can bring the people in, but I can't make them eat. Too many places try and bridge the gap between the dinner crowd and the drinking crowd. Get it wrong, and your fans eat somewhere else before they come to the jazz. Maybe it's my former life as an entrepreneur that makes me see this. Most musicians think their job is to play quality music. They couldn't be more wrong – your job as a musician is to have a following that comes out to see you. Filling the seats is your job – If you don't see that they'll get someone else who can fill the seats. That's why I spend a little money advertising any gig I run. I take this seriously.

Friday night, 7:30pm
Playing at the @(@*#&%^ Yacht Club – Pay is good, but it's funny to be on the other side of things. We eat in the kitchen, aren't allowed to use the regular restrooms. I'm cool with that – they feed us well, but in the kitchen. I don't think they care what we play. I notice two kinds of wives: the ones that match the age of the husbands seem to wear white pants, matching the husbands white pants and blue blazers. Then there is the other kind – short skirts and equal to the median age of the men's daughters. The whole thing depresses me. I don't need any of the money I make from my music biz, so why am I here, you ask. The answer is not simple. Orchestrating your life as a musician is really quite tricky. You'd like to play a steady 4 nights a week, but when you get a call for a gig 6 weeks from now, and it's not a great gig, do you take it? Chances are if you do, something better comes along. You COULD take the new gig, and find a sub for the one you first agreed to, but you'll get a bad rep, and people will stop calling you. If you turn down the crumby gig, you run the risk of big holes in your schedule. But a bigger risk is that when you turn someone down, they stop calling you for the good gigs, too. You have to use your judgment, and some people you just don't turn down. So you end up playing gigs looking at your watch...

Saturday, 2:00pm
I'm hired by Manatee county to teach a jazz master class to high school kids. I show up at the library, and find exactly three people there. Seems like a waste of time, but one of the kids, a junior in high school, has real potential – also happens to be a horn player. He'll go places, I think.

Saturday, 8:45pm
God I love this band! It's raucous and rowdy, but still some of the best musicians in town. A ten piece swing band, it's got a huge sound. I do this gig every Saturday night, and it's always packed. The club is open to the sidewalk, and it's mobbed outside as well. Whenever you get more than about 3 musicians playing together, there is big drama, and tonight is about average. There is an affair between two band members going on, and tonight the guy's wife shoves the girl to the ground. No big deal – if someone got shot, then at least someone would get famous out of the deal. 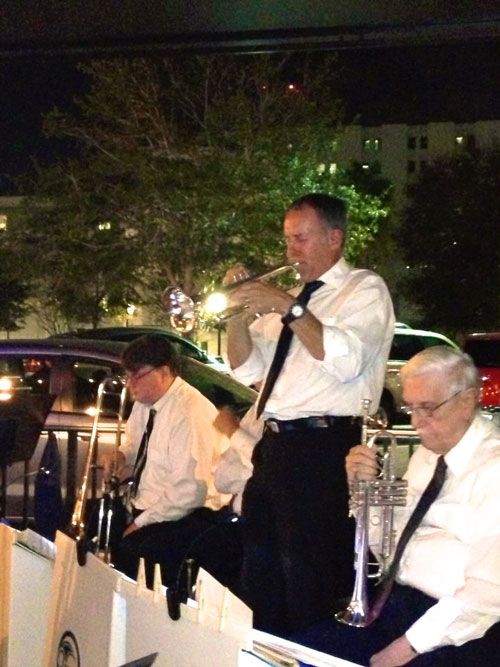 Sunday morning, 8:30am
My lord, what am I doing awake this early? It's easy to say yet to these things a couple of weeks ahead, but then the day comes and you're up at the crack of dawn – I didn't even know there were two 8:30s in the same day.

Denver and the Sky High Orchestra are passing through town, and are playing at the big Baptist Church in Sarasota. He needed two trumpets, and I got a call for the job. I never heard of this guy before, but man, Denver is a killer musician, and writes really nice music. I'm also blown away by the sheer scope of the music production at this church. Well over 1,000 seats, and sound equipment that looks more at home in the Kennedy Center. I wake up in the middle of the first set, and marvel at how good this sounds.

Monday, 10:10pm
What does a jazz guy do on his night off – go out and play jazz, sure enough. I'm at one of the many jazz jams in town... not the best one, but the one that's not so uptight it feels like a high school recital. Sometimes the good cats come out, but not tonight. This jam isn't run by real jazz guys, and everyone knows it. It's ok, though, and I sit in for a set, and have a pretty good time. You just have to be careful what tunes you call – hard core jazz won't work tonight. The kid from my class at the library shows up with his parents, and I toss him in the deep end – he plays a few tunes and gets big eyes. That was cool.

Had a long conversation with the club owner about why musicians struggle so much financially. Everyone complains that there are always musicians that are willing to play for food, drink and tips. We both agreed, though, that it comes from the patrons. If the customers aren't sensitive to the difference between average and great musicians, then the pay will stink. My theory is that music is dumbed down to the level of education in the schools. When I was a young 'n, everyone learned the structure of music, how to read music, basic intonation and singing. Those days are long gone for most. You see it in popular music today, which is less sophisticated than two generations ago. Melodies are simpler, mostly stepwise, and 2/3 of all pop tunes have the same 4 chord progression. Oh, well, it is what it is. They say that jazz has a 2% market share. I'm not buying it, though. Just in the past 10 years nearly every upscale restaurant plays jazz in the background. What's going on here?

After a few years of this life, I'm still not sure what I should be doing. I toy with the idea of opening a jazz club, but wonder if I'd end up like the foodie that starts a restaurant and then can't look at food again. It's a real risk. I'd also lose the camaraderie I've earned with my fellow jazz musicians. I'm actually one of them – most don't know my background... I ride a Vespa to my gigs, and they think I can't afford a car. It's really, really nice being a regular guy. All you hotshots out there should give it a try at least once in your life...