Scientists are just now cottoning onto what the Hippies understood a half-century ago: flowers have power. Florists have been thrilled to tout Rutgers University’s research findings. Jeannette Haviland-Jones, psychology professor, working with her genetics professor husband, Terry R. McGuire, was amazed.

But people have known this intuitively for centuries. Everyone from minuscule insects to burly Neanderthals have been attracted to flowers. The irresistible siren calls of perfume, colors and shape are plants’ tickets to survival, assuring pollen and seeds travel about and plants reproduce successfully. 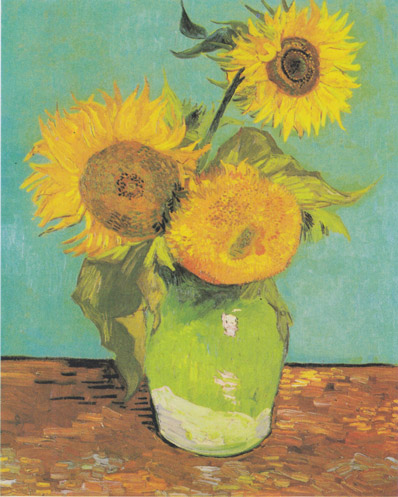 Artists, in particular, hold a special place in their heart for flowers. Claude Monet, that painter of farmhouse-chic bouquets and floating waterlilies, declared, “I must have flowers, always, and always.” His contemporary Van Gogh explained, “How right it is to love flowers and the greenery of pines and ivy and hawthorn hedges; they have been with us from the very beginning.” Flowers have shown up in the earliest of artworks. Egyptian wall paintings featured their favorites – blue lotus flowers. Greeks and Romans took care to include celebratory wreaths and garlands in their mosaics. Each culture developed its own floral motifs.

By the Middle Ages, those gazing at Christian religious paintings could quickly identify the Virgin Mary through her flowers. White lilies with gleaming gold anthers, denoting Mary’s purity and God’s light, decorated depictions of the Annunciation - the announcement to Mary that she would give birth to Christ. Blood-red carnations embellished images of the Christ child, warning of the future crucifixion.

Even withering and dead flowers have had utility, reminding viewers of life’s ephemerality in the Dutch memento mori (“Remember you must die.”) and vanitas (“vanity”) paintings of the 1600s. Few could miss the moralistic message communicated by the still life of a brown-edged tulip bloom set alongside a human skull.

The bashful Victorian Age - although named after a queen who personally seemed to enjoy the lustier aspects of life - developed a detailed flower-dependent language to express what couldn’t (or shouldn’t) be said aloud. Known as “floriography,” this Victorian version of emojis carried coded messages to those in the know. Published dictionaries of floriography met the need of those sending bouquets and nosegays to lovers, wearing blooms in their lapels, penning flowery poems and otherwise enshrining flowers in art. Violets meant innocence; roses, love (with particular emotions associated with specific colors); daffodils, chivalry; and daisies, innocence. Writer Oscar Wilde reportedly signaled his sexuality with a green carnation in his lapel. Miscues could occur. In 1873, Dante Gabriel Rosetti, reportedly in love with a friend’s wife, used a beautiful redheaded model in “La Ghirlandata.” The woman is playing a harp. Roses, honeysuckles and angels (using his friend’s daughter as a mode) circle above her. The artist intended to signal “trouble ahead” by placing her feet in a bed of poisonous monkshood, but mistakenly painted harmless larkspur instead. Although Rosetti mangled his message, experts still laud “La Ghirlandata.” 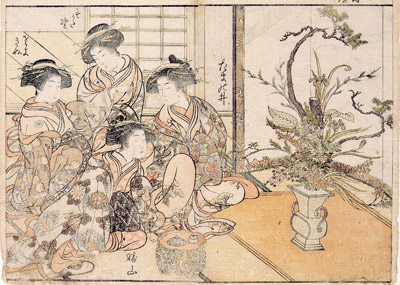 Folks might quibble over whether or not a garden can be art, while not denying the artistry of arranging cut flowers. Nowhere is the placement of flowers in a receptacle more formalized than in Ikebana. Ikebana’s roots extend back over a thousand years to the initial introduction of Buddhism to Japan by way of Korea and China. Floral offerings were an integral part of the religion. A complex schema developed for these tributes. Schools sprang up and over four hundred are now in operation. With a goal to bringing humans in contact with nature, Ikebana at times includes elements not often found in Western flower arrangements. Seed pods, grasses, branches, mosses and fruits find ways to participate amid the peonies. The overall look, as typical in other Japanese art forms, emphasizes negative space, line, balance and form rather than mass. As a result, Ikebana fits snugly within the current Western love of minimalism. Not surprisingly, Ikebana is experiencing increased US popularity. Ikebana International (www.ikebanahq.org), a non-profit dedicated to the promotion and appreciation of Ikebana, is a good place to start for those wanting to learn more about this art form. For those who’d like to dive right in (or maybe host an Ikebana party), FTD has detailed instructions for making Ikebana arrangements at www.ftd.com/blog/design/ikebana. 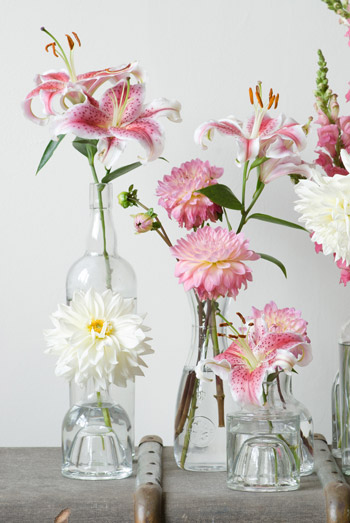 Creatives seeking inspiration for their own art projects need go no further than the backyard, the grocery store or roadside. Blossoms from show-stopper orchids to weedy blue chicory beg to be part of your art. Unlike human and animal models, they don’t squiggle or squirm. Cost can be low or even nil. And, best of all, flowers lift everyone’s spirits.

A helpful list of flower-related organizations can be found at https://www.theflowerexpert.com/content/flowerbusiness/flower-associations.

More articles related to the effects of creativity: 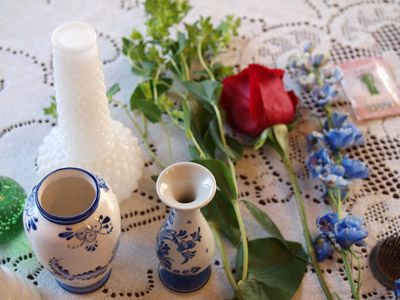 As in visual art, a focus such as the red rose, sparks the arrangement