The Sweetness of Travel

Travel is a beautiful and funny thing. Full of movement and newness, it’s a near-undeniable jolt of excitement in your life. However, also with its fair share of discomfort and challenge, it’s a near-inevitable fast track to personal growth.

We like to think the trips we take are rosy and idyllic, but sometimes they’re tough and trying. Thankfully, as we move on to the next stage of life, we reflect on and integrate our adventures, seeing our voyages with a wider perspective than just in their midst.

I’ve been in Costa Rica for about the last three months, and it’s been nothing short of a marvelous experience. However, it’s had its trials; anytime you leave the familiarity and control of your surroundings and routine, and for an extended period of time at that, you’re gonna have some bumping and bruising amidst the metamorphosis (but that’s part of the fun, isn’t it?)

However, there are two things that imbue a day of travel with wonder and gratitude no matter my state; whether I’m on top of the world, having a trialling day abroad, or I’m just in a tepid in between, one of these two joys are bound to bounce me up and become an aspect ingrained in my memory.

The heroes of travel are tasting a new fruit and seeing new wildlife.

Nothing envelops in awe quite like a novel flavor coming from a previously unknown piece of Earth candy or an in-its-backyard siting of a strange and beautiful creature you’ve up until now only seen pictures of.

Case in point: the Fiery-billed Aracari. During a stressed out day, I headed back to my room at the farm where I’m volunteering, and in the closest tree, I saw colors and a coating that made me think there was a plush doll hanging out on a branch. But, I quickly froze as it moved about and I observed this new marvel. A smaller toucan with ember and flame-like flashes on its body, I was stunned by its radiance. Made my day.

I could say the same about the red scarlet macaws we saw on a beach trip to nearby Uvita. Although near in distance, it took us about six hours to get there (two buses, waiting, you know how it goes). However, we arrived, strolled around, and heard a loud and aggressive cacophony of cawing in the distance. Two bold macaws had staked their claim in a tree up ahead and stuck around for us to witness their presence. Beach trip made.

And don’t get me started on the fruit here.

Tropical fruit is an “Alice in Wonderland” rabbit hole I will happily tumble down all of my days.

A recent new one for me is rollinia (also known as biribá). This funky fruit looks like an extraterrestrial egg and tastes like lemon meringue pie. We grow them here on the farm, but their ripeness is unpredictable; you gotta keep an eye on them every day, and when one turns yellow, snatch it before a squirrel beats you to it! Needless to say, I’ve been vigilant these days.

But the real game-changer for me has been the sapodilla. This little bundle of tastebud-delight has a brown sugar flavor and a delicately balanced texture between soft and firm. The moment I tried it, I was hooked. In fact, after I finish writing this, I’m going right to the fridge to fetch one. I’ve been having a good morning, but this will take it from an A to an A+.

As you go about your travels, whether down the street or to the other side of the world, I wish you new and bewildering fruit and wildlife to jostle your senses and remind you of the beautiful and diverse world we inhabit.

And the truth is, the wonder is everywhere you turn - you don’t have to taste it or see it perched in a tree to know it’s there.

Other articles related to artful travel:

Is It Time to Shake Things Up! 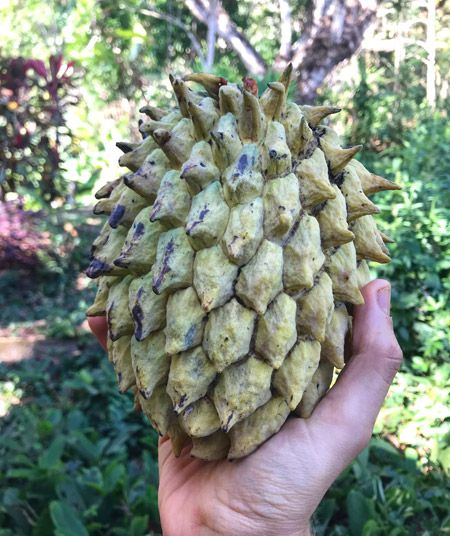