When was the last time you handwrote something? How about the last time you wrote in cursive? I personally know that I’ve been manually writing less and less over the years with more time spent keyboarding. But during a meeting, when I write a note to my kids, or send someone a card, I still defer to cursive penmanship. If you’re a fan of cursive script, I hate to break it to you, . . . but it may become a lost art.

Before diving too far in to the implications of this, let me give you a bit of background on a possible reason why this is the case. In recent years, there has been the development and implementation of the Common Core State Standards Initiative in the public school education system nationwide. Common Core is described as “a set of high-quality academic standards in mathematics and English language arts/literacy” that “outline what a student should know and be able to do at the end of each grade” to “ensure that all students graduate from high school with the skills and knowledge necessary to succeed in college, career, and life, regardless of where they live.” To date, Common Core has been adopted by 42 states, the District of Columbia, four territories, and the Department of Defense Education Activity.

Interestingly, one academic standard not included in Common Core is cursive penmanship. The result according to educators, and as I’ve seen in the experience of my own children, is that instruction of cursive writing is no longer prioritized if taught at all. In speaking with teachers, there is such a stringent timeline and bar of expectations with Common Core that areas not assessed are not taught. While my daughter’s 2nd and 3rd grade teachers have done their best to expose students to cursive, it has been in the form of “busy work” to occupy students before class begins in morning or when they’ve completed an assignment quickly and need an activity to occupy their time. A survey of elementary school teachers  indicated that 41% no longer teach cursive, despite the fact that 71% felt there would be long-term negative consequences associated with discontinuing cursive writing education. Removal of cursive from elementary curriculum has widespread consequences impacting a students’ bodies and minds, interpersonal relationships, and functioning in greater society. 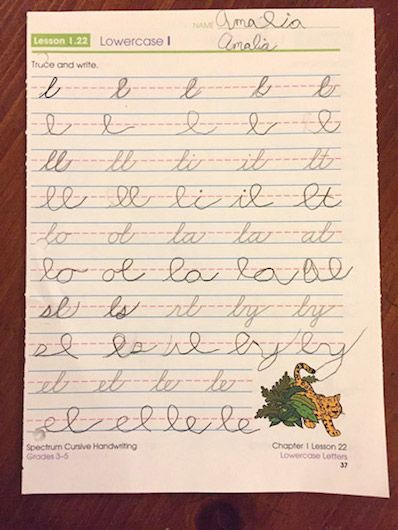 I have a vivid memory of my children’s pediatrician encouraging the use of playdough and crayons when my kids were toddlers as they were known to foster fine motor control and strength in hands. For a generation who spend much of their time swiping, engaging a touch screen, and keyboarding, there is less opportunity to refine these fine motor skills. Any pencil to paper task exercises fine motor control and strength, but cursive in particular develops and requires sustained and refined movements in the hands. As students are first learning cursive script in 2nd and 3rd grades, they’re also becoming more sophisticated in their artwork. There is added value in learning that a letter can be represented in print and script form yet mean the same thing. I also found that, for my son in particular, cursive hones visual motor coordination. Early on, he could read a cursive letter, but had tremendous difficulty replicating one. Fortunately, he attended a parochial school that devoted time and priority to instruction in cursive handwriting. With repeated practice, he continued to enhance his visual motor coordination and writing speed. While this was tremendously frustrating initially, it further provided an added opportunity to practice frustration tolerance and further internalize the important lesson that it takes practice to develop any skill. 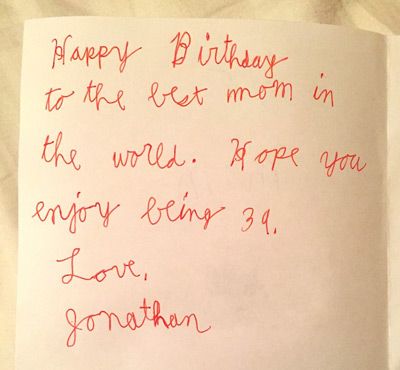 While cursive handwriting is nurturing these physical developments, there is evidence supporting a parallel brain development. Various studies support that learning and memory encoding are better when information is written by hand as opposed to typed. Specifically, learners who write, as opposed to type, have greater activity in the part of the brain that controls language comprehension, motor-related processes and speech-associated gestures. James and Atwood conducted brain imaging studies revealing that there is co-activation of multiple areas of the brain during cursive writing, as compared to brain activation when typing.

There are also social ramifications to the absence of cursive in the typical student’s curriculum. As an example, I’ll tell you the story of a friend’s son. He graduated from a parochial elementary school where cursive was taught and transitioned to a private middle school. As is often the case, he swapped classwork with a peer so they could correct and mark each other’s assignments. When his work was returned and graded by the teacher, multiple responses that he (and his parents) believed to be correct were marked as incorrect. Upon investigation by the teacher, she learned that the other student (who had come from a public school where cursive was not taught) was unable to read the other student’s cursive handwriting and had thus marked the answers as incorrect. While it’s being cut from public school curriculum, many parochial and private schools are continuing to provide instruction in cursive. Are we creating a scenario in which adults will not be able to read the writing of their own peers, or the handwritten recipes from their grandmothers, or even historical documents like our own Declaration of Independence?! How will this future generation of cursive illiterates sign checks and legal documents? Many say this will occur with bio-metrics or electronic signatures. That’s an obvious possibility in our digital era.

But might something more important be lost with the extinction of cursive? Think about the impact of cursive handwriting on your relation to self and others. I have vivid memories of practicing my signature, deciding if I wanted it loopy or sleek. There was a powerful experience of creating a personal style and level of ownership of my written pieces. And what of the writing of those nearest and dearest to your heart? Some of my most cherished possessions are handwritten cards from my husband, my kids, and my deceased mother and grandmother. Reading the words of my mom in her pretty script instantly connect me to her as if she were saying them. I can touch the pen on paper and know that she too had done the same. I can’t imagine that reading her words on a printed email would create quite the same visceral response for me.

Our penmanship is such a fundamental and unique aspect of ourselves, and one that we have the capacity to express externally and permanently. I’m not ready to part with it. So my 8-year-old daughter complains as we do “mommy homework” to practice cursive writing, but I also see her pride as she signs her name – in cursive – on cards to her friends and on papers for her teachers. All the while, I trust that her mind and body are better for it.