A New Spin On An Old Skill

For some fiber enthusiasts, the calming action of spinning needs to be balanced by a more energized activity.  Read how spinning yarn can be an adrenaline-driven, race against the clock.

For thousands of years the drop spindle method has been used to spin raw fleece into thread to weave or knit just about everything from silk, to sails, to everyday items such as socks, sweaters and shawls. A drop spindle employs gravity to pull it toward the ground as it spins creating thread that can be woven. Drop spinning requires less space than a traditional spinning wheel and is a portable activity, convenient for spinners on the go. The spinning wheel, the successor to the drop spindle was invented in Iran in the 13th century.

Pennsylvania farmer Linda Bauer describes herself as a fiber enthusiast. Her fire for fiber was lit when her family relocated from suburban New Jersey to the Pennsylvania countryside in 2004. Bauer’s mother has been a knitter her entire life; whereas, Bauer crocheted as a child. She took up knitting five years ago.

Shortly after her family settled in Pennsylvania, they attended a farm show where Bauer saw a woman spinning yarn using a traditional spinning wheel and the process intrigued her. After experiencing both methods of spinning, she favors the spinning wheel while her daughter embraces drop spinning. Since taking up the hobby she has found that “spinning is a relaxing activity. I enter a meditative Zen state. It gives me the opportunity to think or not.” Bauer says that the act of spinning can be mindless, “I develop a rhythm and then I just watch the spindle and wait for the gentle tug of the yarn as the thread is made.”

Her community of Fiber Friends has grown over the years and now Bauer finds herself a member of a Sheep to Shawl Competition team, which uses a spinning wheel. “This activity has the opposite effect of drop spinning,” she laughs, “it is not at all relaxing, but rather a race against other teams.” For two

and half hours, her team of six works furiously to complete a 78” x 22” shawl with a 5” fringe. The team consists of a shearer, a carder, three spinners and a weaver. The personal goal for her team is to finish the shawl and to have a good time. At the end of the competition, the shawls are auctioned off with the funds going back to the winning team.

The team uses fleece from a guild sheep who attends the competitions with them. The shearer shears or shaves the animal and then passes the raw fleece to the carder. The carder uses a device that is similar to a dog brush to comb the fleece and force the fibers to run in the same direction. 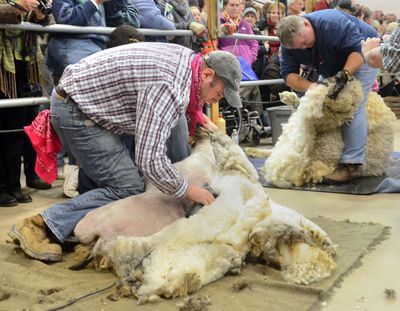 Once the fleece has been cleaned and combed, it is passed on to the spinners who turn the raw fleece into thread for the weaver to weave. The competition time limit is 2 hours and 30 minutes and Bauer’s team occasionally uses all of it, “At a recent competition, the weaver asked if they can take the shawl off towards the end the competition, but we encourage them to weave until the very last minute since the shawl has a tendency to shrink once it’s taken off. At other events, we have finished in just over 2 hours.” The winning team is judged on time, quality of the finished shawl and difficulty of the design. 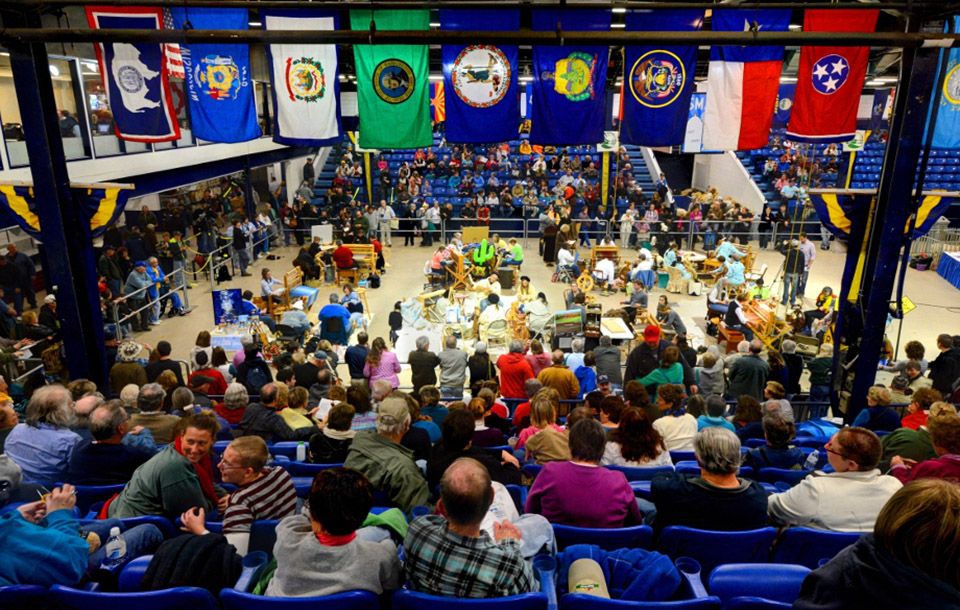 From a Zen-like calm to the frantic pace of a competitor, fiber spinning can offer something for every Fiber Enthusiast. If turning fiber into yarn is your idea of heaven and spinning offers you more creative outlet than you have time for, consider entering a Sheep to Shawl Competition and increase your circle of Fiber Friends.

Interested in finding your balance? If you are an experienced spinner and are interested in joining a Sheep to Shawl Competition contact your local Farm Show organizers.