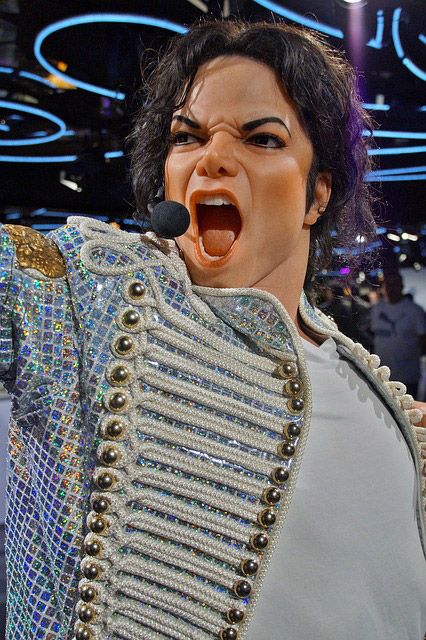 Michael Jackson changed his face more than his music throughout his 50-year long career, and his music changed a lot! Ditto that of Madonna. This should be the life of all artists.

Where some of the look part of this is natural with age, much more of it for pop artists is artistic growth and re-invention. Sometimes we expect this from the music business, but I think their influence is healthy for all creative types and especially those that do call themselves artists.

The word artist is a broad swath that so conveniently seems to cover a person with a paint set, to imaginative visual and audible geniuses. It’s the later of these two which really give us something meaty, something of real substance to chew on and follow.

When you become an artist, you become a free creative spirit with not only the ability to go to new places, it’s sort of your responsibility to explore the outer fringes of you. Imagine being a race car driver getting comfortable with one speed and never testing yourself to gain the extra tenth of a second in a corner to become faster. Fast enough, isn’t even in a racer’s DNA any more than having an artist saying they are creative enough. But for that racer, faster is deeply rooted, and for artists, deeply exploring their creativity by re-invention should be too.

You know the term Pigeonholed? You might see this as your schtick, your thing, what you do. But the term is truthfully more like being put into a prison. No one should seek being pigeonholed. Michael Jackson was raised in the loving arms of Motown music. That trail had been blazed by so many great artists like The Four Tops, The Temptations, The Supremes, Smokey Robinson, and The Imperials, a list that goes on and on, even to include The Jackson Five. ABC, easy as one, two, three, and Stop the love you save may be your own, were great lyrical works of art. But were they masterpieces to the likes of Thriller? No, they were not. Jackson not only had to re-invent himself to make Thriller happen, actually had to do it twice, and he had to leave Motown Records, and re-team himself with a master producer like Quincey Jones. THAT’S REINVENTION!

In the process, he partnered with director John Landis to create Thriller in what was actually a theatrical short film (15 minutes long) and which would not only go on to make Thriller a bigger record-breaking hit AGAIN a year later, it would make MTV a household name. Jackson went from a Motown child star, to pop star, to the king of pop, and he sure as hell didn’t do it by remaining the same. He didn’t do it by being comfortable. He did it with constant artistic growth and reinvention.

The same can be said of Taylor Swift. She began as a young country songwriter, who became a country singing sensation, and is now one of the most played and listened to powerhouse pop stars on the planet. Constant artistic growth and reinvention. Lady GaGa? Not only the same, she read the book on reinvention. She learned in her business of music, that change Is not only good for a pop artist, it’s essential.

I think the best reason for reinvention of all though, is adding a language and a new form of communication to your voice. This not only allows you to express yourself in new ways, it allows your work to reach new audiences. If you paint, and you only paint one thing, you will likely master it, that is for sure. But watch out, because it may become the master of you! You’ll become comfortable, and creating will become easier and easier, and as you end up doing the same things over and over again, your work will become less and less original. One day you’re not an artist anymore, you are simply a renderer.

So what drives a lack of growth? I say it’s laziness or fear. Laziness is hard to fix, but fear can be conquered. Fear can be based in - If I stop doing my bread and butter thing, I’ll starve. Is this realistic? You bet it is. It’s not easy “for most” to make a living with their art. So when we find that thing that works, we do it until we’re trapped by it artistically. Hopefully not. How do you venture away from security then? Well, one way is to simply try new things at the same time. Those things you try may be in the same medium or a new one, and they may even be a new genre or subject matter. They can also be a completely different thing altogether.

KC and the Sunshine Band, The Beach Boys, and many more bands never reinvented themselves. They travel the world doing the same old thing. Are they making money? Yes. Are they creatively satisfied? I doubt it. The Rolling Stone Stones said I can’t get no satisfaction. Apparently, that’s not true, because they are wildly successful doing the same old thing. But they would not be the norm. Then you look at Rod Stewart or Paul McCartney. Transformation gods, they made careers of reinvention, and there are so many more.

There is, of course, money, but there is also something said for creative happiness. As a selling artist, I began with watercolor paintings. I moved into acrylics and a whole new style of paintings, and in the process was able to not only find joy but raise the price of my work. Now additionally I began building fine scale models. Dioramas to be more specific. From there I switched to oil paintings and there was a big jump again. I then started writing a lot, and from there I wrote poems to accompany my paintings. I also was writing stories, a newspaper column, and even creating short video stories to also accompany my art. Then my writing became more prolific. All of this was gradual, but all of it took me to new places and I believe kept my art fresh, and my art career exciting. Today I’m more of a writer than a painter. I figure I’ve reinvented myself about five times in 31 years. Each is not a new me, it’s an improved me, opening me to joys discovery and to new audiences as well.

If you’ve been feeling like you need a change, you owe it to your artistic self to venture deeper in the pool. Your feet are touching the bottom, swim. And don’t just make ripples, make waves! Seek a higher you.

Additional articles on growth and re-invention:

Finding The Unusual in Everyday Life